A Date With Judy Movie Review 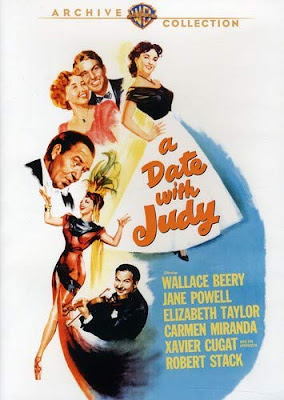 Elizabeth Taylor has certainly drawn my attention of late. Yesterday, I finished watching A Date With Judy and thoroughly enjoyed it.  For this 1948 MGM movie,Taylor teamed up with an all-star cast that included Wallace Beery, Jane Powell, Carmen Miranda, Xavier Cugat and Robert Stack.

A coming-of-age movie, it featured two young ladies competing for the same man. This sunny musical was perfect for the two young actresses who were ready to move into more mature roles. Taylor is reported to have said, "One minute I was kissing a horse (in National Velvet) and the next I was kissing Robert Stack."

Powell is billed as the star and while she was pretty and talented at acting, singing and dancing, it was hard to take your eyes off of the beautiful Elizabeth Taylor. She was 16 at the time and given the full MGM star treatment including many extremely beautiful gowns.

Buy A Date With Judy from Amazon.
Learn about The Best Elizabeth Taylor Movies.