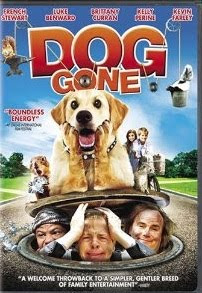 Dog Gone is a straight-to-DVD family movie that was produced by Screen Media Films and Unversial Studios and released on October 7, 2008.  It's not a big budget film but it is an entertaining adventure that includes one 12-year old boy, one dog and three bumbling jewel thieves.

If you have a youngster in your home who loves building things, they will love the contraptions that Owen uses to thwart the thieves.  (The contraptions remind me of those that were used in the 2009 movie Hotel for Dogs, although done here on a lower budget.)

Of course, if you love dogs you will love this movie and if you're a dog lover who cannot stand to see a dog hurt, be aware that there is a small section near the end where the dog is in a perilous situation but that all turns out fine in the end.

It is a family movie, rated PG for bullying (which does get nasty), rude humour (also known in my world as bathroom humor), language, mild threat and action. However, if you are like me, and you know how much your children enjoy bathroom humour, you're willing to put up with some of that.

The comedy is over the top and at times outrageous and the trailer makes that very clear.  I particularly enjoyed the antics of the obviously not-real forest critters.

Here's a peek at Dog Gone, via the official movie trailer:

Note that this film was titled Diamond Dog Caper outside of North America.