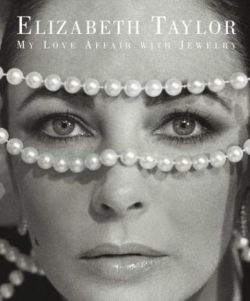 The Collection of Elizabeth Taylor is a celebration of the life and times of Elizabeth Taylor hosted by Christies’ auction house. It began on September 15, 2011, with a series of travelling events and exhibitions, and ends with two auctions in New York on December 14 and 15, 2011.

The first day of the auction is devoted to her jewels, often called The Crown Jewels of Hollywood or, as my local newspaper called them this morning, the "fashion equivalent of King Tut's tomb." This auction includes such pieces as La Peregrina, a pearl worn originally by European queens and the Elizabeth Taylor Diamond both worth millions as well as ‘lesser’ pieces including the wedding bands from her marriages to Richard Burton.

The second day of the auction is devoted to Elizabeth Taylor’s collection of one-of-a-kind haute couture gowns, pret-a-porter fashions, coats, capes, handbags, costume jewelry and shoes and will include a couple of wedding gowns. Apparently, her closet opens to reveal an amazing selection of famous clothing items that Taylor chose herself for certain events in her life, like the dress she wore to the Taming of the Shrew royal performance in 1967.

Literally a jeans-and-tee kind of lady myself, I’m not sure why I am fascinated by Elizabeth Taylor’s life. I would really love to attend the auction in New York although simply as a spectator wanting a better look into the late actress’s spectacular collection. It would be nice if some of Elizabeth Taylor’s pieces wound up in a museum of some sort so that they could be shared with the public, which would be true to Taylor’s feeling that she was the only a temporary guardian of these pieces and that they were meant to be shared with everyone.

I enjoyed learning about her jewelry in the book called My Love Affair With Jewelry. If you yourself are interested in learning more about her jewelry collection, the pieces in it and how she came to own them, you can read more about that book by clicking right here. I understand it to be the only book about her life that she wrote herself.

If you are interested in learning more about the auction, you will find Christie’s press release right here.