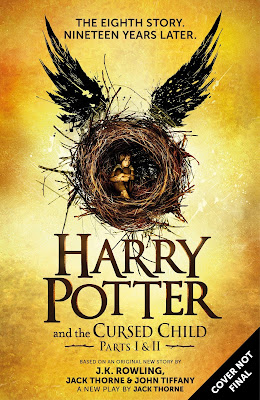 Well, it is official and the world is abuzz with the news. J.K. Rowling, Jack Thorne and John Tiffany's London play Harry Potter and the Cursed Child will be released as the eighth book in the Harry Potter series.  That news is exciting and very welcome for the legion of fans who grew up with the boy wizard and his world and who continue to want more.  Hopefully, the book will live up to the reputation of its predecessors. However, according to J.K. Rowling herself, it is the SCRIPT that is being released and not a novel.

Anyway, the Cursed Child will be released shortly after midnight on July 31, 2016. That date is set to come together with Harry's birthday and is the day after the opening of the new play of the same name in London's west end.

In the new script-formatted book we will have 320 pages to learn about Harry Potter's adult world in which we find him a father to three children. His current reality, set nineteen years after the last book, finds him struggling with the past and finds his son Albus struggling with an unwanted family legacy.

As you can see by the image shown here, the official artwork has not been released but that is no problem. I expect most of us will trust Rowling and her team to come up with a suitable cover. Besides, most of us are not really concerned about the image. We are just plain excited at the fact that there is a new book coming.

Harry Potter and the Cursed Child is available for pre-order on Amazon by clicking right here. Note that if you choose to pre-order the book, you are protected by Amazon's price guarantee. If the price goes down between now and the release date, you will pay the lower price. Once again, be sure to note that this is a SCRIPT and not a novel. I am sure that it will come as no surprise to you that this book is already on top of Amazon's best seller list and ranked "HOT." I hope many will not be surprised at the format.

How about it? Are you excited? Will you be ordering the book as soon as possible? Would you like the cover to be as shown here on this page or would you choose something a bit different?  Are you disappointed that it is going to be a script and not a novel?

See you
at the movies!
(Or at the book store...)
Brenda

Pre-order your copy of Harry Potter and the Cursed Child from Amazon.