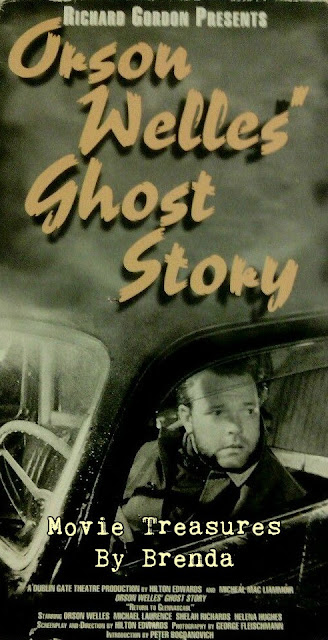 Orson Welles' Ghost Story is an old-fashioned ghost story called exactly that, Ghost Story. It is the tale of a hitchhiker's story set in the Irish countryside. In this short 1951 film, Orson Welles uses ordinary means to scare us and he makes the film fun with his appearance and narration. The short film also includes great performances by Shelah Richards and Helena Hughes and is the work of director Hilton Edwards.

"It features Welles driving in the countryside one night and offering a ride to a man with car trouble. The man relates a strange event that happened to him at the same location. Two women flagged down his car one evening, asking for a ride back to their manor. They invited him in for a drink, and after leaving, he went back for his cigarette case. He found the manor deserted and decayed. In Dublin, a real estate broker told him the mother and daughter had died years ago. Welles, sufficiently spooked, drops the man off at his home and leaves in a hurry when the man asks him in for a cup of tea or something stronger as the ghostly women had earlier invited him into Glennascaul. As Welles drives off he passes two other stranded women who wave for a ride, flesh and blood women who recognize the famous actor behind the wheel."

This film was nominated for an Academy Award in the Best Short Subject category.

The short film is also known as Return to Glennascaul and is part of a DVD release of Orson Welles' Othello. You can find Ghost Story on Amazon by clicking here and you can find Othello here, though I do not see it in a North American formatted disc.