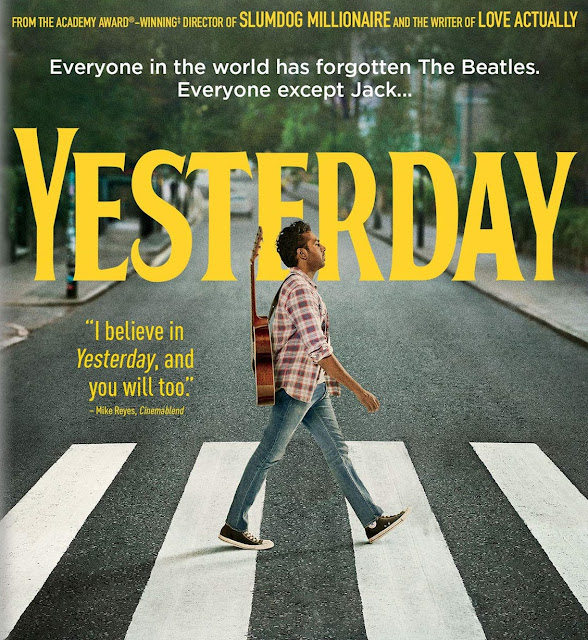 Yesterday is totally enjoyable, funny, charming and sweet romantic comedy. At least that is what I thought about it.


The premise of the film is odd but simple. A blip to the world's power supply wipes the earth of any sign of the existence of the Beatles. It turns out that Jack, a struggling musician in England, is the only one who remembers the Fab Four and their music. Being the only one with the knowledge of some of the best-ever created songs puts him in a unique position to better his career and allows us to reminisce with some fabulous Beatles tunes. Jack is and has always been supported in his quest for musical success by Ellie, who acts as friend, manager and roadie driving him around to gigs when she is not in the schoolroom teaching math. The rest of the story follows Jack's rise to fame and stardom and how that impacts on his friendship with Ellie.


It stars Himesh Patel and Lily James and the music of The Beatles. You might know Patel from the EastEnders or The Aeronauts and you might know James from Cinderella, The Guernsey Literary and Potato Peel Pie Society, Mama Mia: Here We Go Again or Downton Abbey, where she played Lady Rose MacClare.  The cast is rounded out with Joel Fry playing the oddball character Rocky, who steps in as manager when Ellie is not available and Kate McKinnon playing Debra, the Hollywood mogul determined to profit from Jack's newfound music writing talent.  I have deliberately chosen to leave off this cast list the special guest since we did not know that he was going to appear in the film when we watched it and not knowing added to the fun.


Here's a peek through the official movie trailer, which reveals the special guest so if you'd like to keep that part a secret, don't watch the trailer.


Apparently, not everyone appreciates a charming and sweet movie as much as I do.

Reviewers on Amazon give Yesterday 4.4 stars out of five.

On Rotten Tomatoes, audience viewers gave the film a solid 89 percent while their approved critics gave it a lesser score of 63 percent.

Roger Ebert's website gave it a 2.5 of 3 stars though I found author Sheila O'Malley's words less enthusiastic than her score. She said, "The film gets caught up in the relationship between Jack and Ellie," which is true and that "much of it did make her feel good" though she found it underdeveloped and that she was "conflicted about a choice made late in the film."

The New York Times said, "Yesterday is more of a novelty earworm than a classic. It’s appealing and accessible in a way that the Beatles never really were. If it took itself — and them — a bit more seriously, it would be a lot more fun." Yes, of course, this film could have been a lot deeper but that did not detract from my enjoyment.

Rolling Stone magazine says, "Yesterday has its heart firmly in the right place. It’s the challenge to take it to the next level that’s missing."

Obviously, I took this film in a much less critical way than those officials who review movies.  I know that certain issues were not fully fleshed out and that explanations were not given for some of the things that happened in the movie. Yes, the movie could have been more but what instead it is is as I said in the beginning, is a totally enjoyable, funny, charming and sweet romantic comedy.

Watch it for yourself and let us know what you think. Buy your copy on Amazon by clicking right here where you will find the Prime, Blu-ray, DVD and 4K versions. If you buy one of the discs, be sure to watch the extra scenes, alternate ending, etc. We enjoyed them, too.