I Am Big Bird: The Caroll Spinney Story 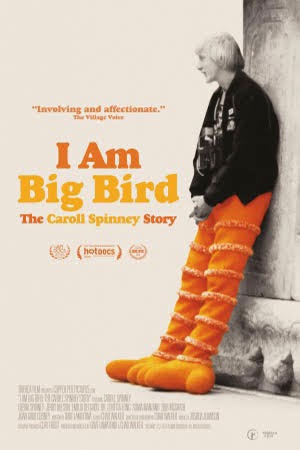 I've always been fascinated with the story of the faces behind the famous puppets. You know, people who created the personalities of Kermit the Frog, Elmo and Big Bird. Puppeteers like Jim Henson, Kevin Clash (whose star has been tarnished of late) and Caroll Spinney.

It was with interest then that my ears perked up or rather my interest was peeked when I read the story "The 'Inside' Story of Muppets" Star in today's Ottawa Citizen newspaper.  It summarised the person behind Big Bird and discussed the new documentary film that is being released today, May 5, 2015 on iTunes and Video-on-Demand on Amazon before it arrives at movie theatres on May 15.

Would you believe that Spinney has played Big Bird for more than 40 years? That Spinney contorts himself in the claustrophobic space within the suit of Big Bird? That Spinney also created the Sesame Street character Oscar the Grouch? That Big Bird has a star on the Hollywood Walk of Fame? That last point is not really a surprise to me. He is also the recipient of a Daytime Emmy Lifetime Achievement Award.

At 80 years old, Caroll Spinney is the last of the original Sesame Street puppeteers.

Check out the trailer for yourself. I guarantee that, if you have fond memories of Big Bird, this video will pull at your heart strings.

I grew up with Big Bird. He holds a special place in my heart. It is with some bias then that I think this looks like a very interesting biographical documentary film and have added it to my list of must-see films. If you are interested in I Am Big Bird, you can buy or rent it now from Amazon by clicking right here or check it out at the movie theatre when it is released a little bit later this month.

Rent or buy I Am Big Bird: The Caroll Spinney Story from Amazon.
Meet Jim Henson: Creator of the Muppets

Wow, that trailer really is good. I guess most of us don't really think about who makes Big Bird live. Big Bird is just Big Bird! (And Oscar, of course.)

Thanks, Susan. I agree!