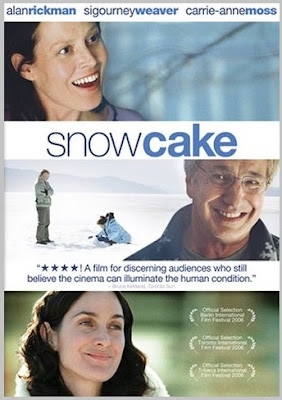 I will admit that I had never heard of Snow Cake when I picked it up and that I picked it up purely because I saw Alan Rickman's name on the cover. It was interesting then that it turned out that this film was shot in Canada not very far from where I live and that the cashier who rung up my sale actually had a friend who appeared in the movie.

Anyway, we put the movie in one evening to watch even though we had little idea of what it was about. Pretty much what we knew is what you see on the cover - that it stars Alan Rickman, Sigourney Weaver and Carrie-Anne Moss. We later discovered that the movie stars two Canadian actors,  Moss and another Emily Hampshire who is not named on the cover.

The story tells the tale of a new friendship between a high-functioning austistic woman played by Weaver and a man played by Rickman who has just survived a car accident.

Take a peek here at the movie trailer: 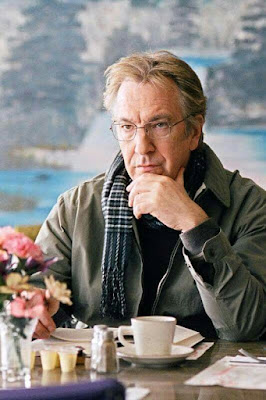 It turns out that the movie is really about the man's journey and not about autism though one of the main characters is autistic. It's a quiet movie, with lots of funny moments. Weaver and Rickman both give solid performances and I would love to join them for a game of Scrabble, a verson of which they play in which you can use non-existent words so long as you can use them in a story.

This movie is rated 14A. In terms of what to watch out for or be aware of, there's a tragic car accident though it is not overly gory, a man recently released from prison and a woman who receives male callers. Sex is discussed and there is a scene of the couple in bed after ward but no actual sex on screen.  A four-letter curse word is heard a few times.  I think most adults would be comfortable with the content and I see that Common Sense Media recommends it for those 15 years of age and up and that seems reasonable to me.  I am sure it would be too quiet a movie for children, anyway.

RECOMMENDED? Yes, I would recommend this movie to those who want to see Alan Rickman in another film. I feel like I learned something about how autistic people or at least about how one individual with autism might function in the world. Don't miss the extras, they were informative.

Looks really interesting. Will check it out. Saw it was not rated, do you know why?

Hi Fay & thanks for visiting. I checked my case and it turns out this movie is rated, 14A. If you watch it, be sure to let me know what you think. Brenda